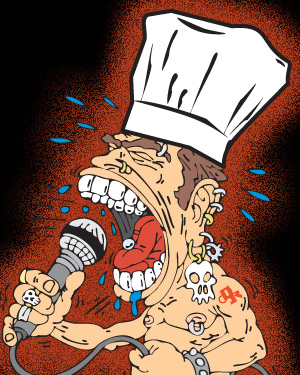 In my last article I talked about the “prodigy”. I touched on the idea that the meaning of words seem to spread like old tattoo ink on some old -Gloucester hooker’s tramp-stamp. Bad analogy. Sorry. I just wanted to say “hooker” and “tramp stamp”. What I’m saying is that adjectives, especially ones of a superlative nature, are used to describe things that actually have nothing to do with the reality. The word “genius” for example. How many times have heard that word to describe a person, idea or thing when they are absolutely not deserving of this accolade? Or calling a kid who can play “Pride And Joy” on the guitar a “Prodigy”. There are many examples.

The word(s) I want to talk about today is “Rock Star”. Not only has this word been so thoroughly over used to describe people undeserved of the title, but it has given rise to a population of phonies and posers, who believe wearing the clothes and having “attitude” (and even a TV show), puts them on a par with “Keef” Richards.

I can’t go through the channels of my basic-cable bundle without seeing some guy with black spiky hair with his eyebrows pierced; his arms and neck covered in Tattoos, slurring his words and putting his heavily be-ringed fingers up in the ol’ “devil horns of rock” sign. What is he doing on TV???? He’s baking a fucking cake. Thats all. He’s stumbling around his kitchen and talking to the camera; his every other word is bleeped because he can’t talk about putting “…fondant around the top tier…” with out dropping “F-bombs”. Clearly this guy fancies himself a Rock Star. Can he play an instrument? Maybe. But he aint on stage playing rock’n’roll, dazzling thousands of adoring fans who paid to see him. He’s a baker.

On another channel I see the same kind of guy (tattoos, piercings, etc etc). He’s fixing a car. He hammers out dents and repaints a car and somehow this makes him Tommy Lee of Motley Crue. Yeah he’s on TV, yeah he’s banging’ a lot of broads, probably has a lot of money…. Is he playing drums on stage and dazzling thousands of adoring fans? No. He runs a body shop.

The list goes on and on. Plastic surgeons, gardeners, chefs… Even skateboarders, basketball players, soccer players, pro athletes et al. All tattooed up, pierced, acting the fool…. Look at “The Bird” on the Miami Heat. He’s rich and famous. Covered in tattoos, piercing, hair-gel…. I’ve heard the term “Rock Star” used to describe him and the people I’ve mentioned above…Is he a Rock Star. No. He’s not.

I hope this doesn’t make sound bitter or annoyed. I’m not. I am amused by this cultural observation. And I’m amazed how the meaning of “Rock Star” has devolved so dramatically.

So here’s how I define “Rock Star”: A person who is famous for playing rock’n’roll music. duh

If you dress like a Rock Star and act like a Rock Star, but you don’t get out there on stage and perform for your hard-won audience, then you’re not a Rock Star. And no it doesn’t count if you have a garage band you jam with on weekends and play an occasional gig at a local bar.

Honestly, I don’t care that people want to look like and act like they’re Rock Stars. Does that diminish the stature or “quality-of-presence” of the true Rock Star? Are there any real “rock stars” now that every other person is a “rock star”? I dunno. Maybe nothing can diminish the glow of true rock stardom.

I always wanted to be a rock star. I don’t consider myself a rock star tho I have definitely earned the right to wear it! Some old friends always affectionately call me “Rock Star”. Well, if every other Joe Blow is a “rock star” then I don’t want to be a rock star!

Do you give Skype lessons?

Yes! Doug does give Skype lessons.
Go to the CONTACT & INFO in the navigation and click on Lesson Request
http://dougrappoport.com/contact-info/lesson-request/