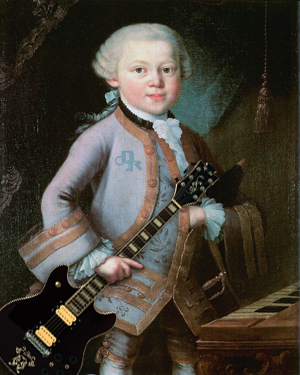 I thought I’d share my thoughts on this rash of “prodigies” that seem to crop up everywhere.

The number of times I’ve played in towns where proud fathers and local towns-people come to me before, after and DURING shows to brag about the town’s young, prodigy -guitar superstar are WAY too many to count.

People I have never met, who are on Facebook, tag my name to videos of some 7-year old guitar player, playing “Purple Haze” or “Black Dog” or “Badge” etc etc….

YouTube is RIFE with these “prodigies” playing classic rock tunes or some mildly convincing blues licks. And these videos hail from every corner of the globe. From Po-Dunk, U.S.A. to some tiny fishing-village on one of the gazillion remote islands in the Philippines.

The word Prodigy is definitely one of the many words we English speaking- peoples have overused so badly, its meaning has become cheapened; the force of what it denotes is drastically reduced. For example: Mozart was a bona fide, real-deal prodigy. Are you telling me a 5 year old kid playing “Smoke On The Water” is also a prodigy?

So what do I think of these young musicians? I think its cute. Am I impressed? Not really. But like I said…. its cute.

So what is the big deal about “prodigies”. I think we see someone become very good at something very very quickly and we think, “…well if he/she is this good now, imagine how great they’ll be when they’re 20! or 30! or 40!!! Oh my God at 50!!!!” We seem to hope, or worse, expect that the “prodigy” will improve exponentially. And that’s exciting. However, the truth is they will not….

As far is I can tell, a “prodigy” (as we define it by today’s standards) is just a person who “get’s there” a little, or a LOT faster than most. Where it may take your average musician-aspirant, of decent natural- talent, and average of 10 years to master a particular technique, the “prodigy” may do it in 2 years. Or 5 years…. whatever. faster than most.

So what happens to a 14 year old who is as good as an average, decent, 23 year old at blues rock? Well he gets a lot of hits on YouTube. He may get to jam at the NAMM show in some booth with Steve Morse or something. He may get to do some fun gigs around the area where he lives. But ultimately he’ll be 23 years old and he’ll be just another good blues-rock 23 year old-guitar player. He got good fast, but that exponential improvement doesn’t happen. I’ve never seen it happen.

Listen to Mozart’s work when he was 11. amazing!!! Now listen to his music when he was 30. Its still great, but is it really much better than when he was a kid. yes, but not that much!

Joe Bonamassa is the top dog in the blues-rock world. He is a tremendous guitar player. You can go on YouTube and find videos of him absolutely BLAZING at 11 years old, 12, 15, etc etc. Listen to him now. Is he WAY WAY better now than he was at 15? no. He’s not. He was just as fast and just as clean as a child as he is now.

Listen to Yngwie at 19 and now. Any difference?

Eric Gales, one of my favorite guitarists. Listen to him playing when he was 15 and listen now. Huge difference? Not really. Sure his chording and melodic sense has improved like fine wine, but overall he sounds pretty much like he did then.

Its popular to say that Jeff Beck has improved exponentially. Listen to his guitar work over the last 30 years. He sounds fantastic through every era, and with only subtle changes to his approach, and only to suit his own musical whims. Exponential improvements? Nah.

I mean absolutely no disrespect to the above mentioned musical heroes . I was making the point that the state of “prodigy” is an ephemeral state. That kid who is beyond his/her years in skill will be another face in the crowd in very short order.

The truth is, there are very very few people who deserve the title of prodigy. They come around once in a blue moon.

So what do I call a kid who gets great at an instrument faster than normal? : Talented.

A kid who comes along and composes symphonies or scores movies with epic John Williams-esq scores at age 9…. That’s a prodigy.

Your kid’s great for his/her age? Wonderful. Take a lot of pictures. Take video. Get them on T.V.. Do everything you can to get them a jump on a musical career for when they turn 20, and everyone else has caught ’em, and now they’re just one of a ga-zillion really good players….

I met a Russian kid at the NAMM show 3 or 4 years ago. He was 13. He grabbed a guitar and started playing some 9 minute Paganini piece on the guitar. Picking every note. Fingers flying all over the neck. Effortless. SUPER fast! I know a bunch of guys who can do that, but they’re grown ups. And thats why it was neat to see a kid doing it. He’ll be 20 in short order and it won’t be that impressive anymore. He definitely won’t be playing it much faster or cleaner by then or any time else. He just happened to get that technique down in 2 years rather than the usual 10-15 years it takes. But we gathered around, smiled, shook our heads in “disbelief”…. It was cute.

In my youth and my area of the world, we had alot of really great guitarists and I was 1 of them. But of all of us 1 would stand out .His name was / is Marc Bonillas. I’m sure you know him or of him. You mentioned growing up with King Edward being top dog. I totally understand. I have been lucky enough to be a guitarist since 1967. I have lived and learned as the Electric guitar has evolved. And as my own playing evolved I’d come across the latest top dog and see,hear and incorporate whatever I’d absorb from him, then move on. My appreciation and understanding of what constitutes greatnesss is due to my FOREST GUMP type life. (example Malmsteens debute with Keels band in SF. I was right in front of him. I’d heard of him and after seeing him went on record about him leading the wave of neo classical shreders. The other was when if i first witnessed the band Metalica who were a ladt minute fill in for Cirith Ungyl at a SF club. i saw the future of that genre that night. And knew it was not for me to Osborb yet still respect)
And now it’s you that my advanced age knows I’ll not ever master aspects of your style. But damn Doug I sure do dig it. And I ain’t dead yet..Just old…Cheers

Great show last night in Honokaa! You ,Edgar and you band mates KILLED IT! Liked you take on prodigies. The older I get the better I was! Keep on rocking!

hey doug,great article on child prodigy..recently had a 12 year old boy come into the store with his father,who was bragging how good his son could play zeplin,hendrix,etc…so i put a guitar in his hands,and he barely got through playing…no technique and timing at all..i than open mel bay #1 and turned to the 1 st string page of E,F,G, showed it to him,asked him to play a line and he says he has no idea what he is looking at…i hope to see you on your next trip up here…noel

Hey Doug,
Love your playing, and have been following for a year or so now. The term prodigy is thrown around loosely, and I agree that a mastery of technique at a young age is rarely accompanied by a good melodic sense (taste and feel). Alternatively, I recall a few very young guys that have come along with the very little of both, but people just ate up the fact that they could rip a ton of sloppy pentatonic licks. Beware not to offend the guitar gestapo on YouTube, and/or offer any constructive feedback. HA! Thanks for showing the guitar and YouTube community how technique and melodic sense come together. Hope to catch you in the Raleigh/Durham area some time soon.
All the Best,
Bill

Nice read . My wife works in a music store and I see these young kids and their fathers frequently . There is a new one every year . They think they are accomplishing some world changing feat . I’ve been playing since I was a teenager and I’m 61 now . I play in a cover band and feel lucky to still be a gigging player , it’s a luxury . I will never play like you but it sure inspires me . I’ve been sharing your talent with a lot of my playing friends . Lot of great players in the world but in my estimation you are way up at the top of the heap . I look forward to keeping up with your career .