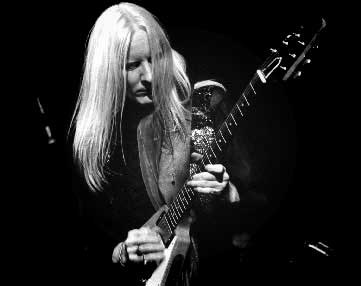 Johnny Winter passed away this week. I thought I’d share my thoughts and my experiences with Johnny.

As a guitar player, Johnny was always in my consciousness. Not unlike a kid who’s into baseball and has an “awareness” of The Babe.

Yeah I knew Johnny was a blues legend. I knew the image: Bluesman with the voodoo hat and the uber-bright blue tattoos. Thats about it.

Im not sure but, someone, sometime played me some Johnny Winter and, to be honest, I wasn’t impressed. I came up in the time of Eddie Van Halen (Long may He Rule) and other 80’s metal gods of shred. My exposure to the blues was limited to Angus, Eddie, Warren, Yngwie (sometimes bluesy), etc etc. Not traditional blues by any means, but a new, modern, highly stylized blues.

In my late teens I finally got Hendrix whom to that point I had despised. But I finally got it! I became obsessed. SRV had just died and I listened to him and loved it. Through SRV I came to Hendrix, and then onto the past masters.

Without digressing any further from Johnny, I only wish to make the point that while I had been into the blues in the modern sense, I had finally come to appreciate, love and understand it, for real, in the more traditional sense.

Cut to many years later, and I get the gig with Johnny’s younger bro, Edgar Winter. While we got to know each other he often told me that Johnny was the shit back in the day, he was all fire etc etc etc…. And I just kinda said “…yeah yeah yeah…” while rolling my eyes. Many of my guitar player friends asked me if I had met Johnny Winter and was he really any good or just another sloppy “blues man”. They really didn’t know. And by the time I had met Johnny he was sitting down to play and was looking addled and a lot older than his years. In fact, the stories of his hard living were better known to me than his musical history.

I can say, unequivocally, Johnny Winter was one of the most important, influential, explosive, authentic, charismatic, talented and tragically- overlooked guitar players of all time.

I’ll go further: The late great Stevie Ray Vaughn owes a sizable chunk of his arsenal to Johnny. Thats putting it lightly. I never realized this until I took the time to hear/watch Johnny in earnest. It shocked me, if I’m being honest. SRV (and I say this with ALL respect to one of my faves) was so busy apologizing to the old black blues-masters for the success he’d gained on their music that he failed to give Johnny the nod. The nod that would have properly given credit where it was due, moreover would have turned GENERATIONS of the multitudes of SRV’s fans on to a true blues legend who spent the later years of his career in relative obscurity. I do believe that the vast majority of SRV’s devotees are unaware of the roll Johnny played in the blues and rock world and in the all-mighty SRV’s style.

So now I invite the blues fans of the world who think the blues start and stop with SRV, Kenny Wayne Shepard, and Joe Bonamassa. PLEASE get to know Johnny Winter. For real. In depth. Learn about him. Listen to him sing. Play. If you truly are a blues fan you’ll be amazed and then pass him on to the next generation. He deserves his spot in the Pantheon of Greats for all time.

Over 11 -12 years I’ve had a few visits with Johnny. Often, in the beginning, with some trepidation, I visited with Johnny for a hang. His legend loomed large and the stereo type of the temperamental blues man was a little daunting. I felt sure he’d think of me as some young rock guitar punk who didn’t really have a clue. The truth about Johnny is anything but.

Johnny Winter, despite what one may think of an authentic bluesman, comes from old Texas money. He and Edgar were raised in the most genteel of old Texas circumstances. Bible, education, values, a loving home, and impeccable Southern- manners. He was at once foul-mouthed and exceedingly gracious. He checked his watch every 3 minutes to see when he can finally get on stage. “… hey Paul! When are we getting on stage? I wanna fucking play already!!” LOL!

I’ll close this out with a more personal, slightly self-aggrandizing anecdote. After infrequent visits over the years, Johnny kept asking me to say my last name and explain where it came from. Somehow he just never wrapped his head around it. Last year Scott (Johnny’s long time bass player) came up to me while I was getting off stage and they were coming on. He told me, with some excitement, ” …. hey, Johnny was listening to you play and he said, “… hey man! Rappa…Rappo…Poppa…Porpa … Proprot…. Edgar’s Guitar Player… He’s good!’ “

That meant the world to me…. Rest In Peace Johnny.

Doug, I came across you while looking into the Seymour Duncan Saturday Night Special. I really enjoyed your playing in the demo for that pickup. That led me to learn a bit more about you, which in turn led me to this post, and now in just a day I’ve got you AND Johnny Winter to listen to. Thanks for your playing and for this kind post — it’s great to learn a bit about you both.

I’ll never forget the first time I heard a JW album…JW And Live….one of those transcendent moments. Was around 73 and I went right down town and bought it. Meantown Blues is just the rawest rockingest electric blues that may have ever been recorded. Nice tribute. It’s unbelievable to me that any electric blues player would be unaware of Johnny’s work..

You are my favorite guitarist that ever played in any of Edgar’s bands and I’ve seen a lot of them. I have met edger several times got to have 5 conversations with Johnny in my lifetime he was always courteous and kind same goes for Edgar. I think that you are one of the finest players ever walk the face of the Earth and for someone like you to acknowledge Johnny makes me feel good God bless you.

A certain British guitarist who shall once remain nameless was once holding court in a guitar store in the midlands. This was in the early 90s and many questions were being asked on what to listen to, which education videos to buy etc. His exasperated response was “Learn the first three Johnny Winter albums and you will be able to play any style of blues, anywhere at any time…there’s nothing else really worth learning”.

Johnny took a moment to play and sign my National Steel guitar.
He completely ignored his manager Slatus –
who was standing there yapping at Johnny to hurry it up. Johnny just looked at him then went back to playing my guitar saying “I like the way you got this set up.”
He knew he was a star..but still Southern gentleman to a complete stranger.
RIP my man.

I appreciate your candor and time to write this tribute. For those of us for years who know and understand Johnny’s genuis it feels good to see someone as talented as yourself to express your feelings about JW. I find it hard to explain why millions of guitar lovers would not be attracted to Johnny’s style and playing. For me, it was the signature riffs, the raspy voice, the on record yells and off note “yes yes” that made him one in a trillion. His guitar in every way was an extension of his body, he played it virtually non stop for 60 min when live. I am sure you have seen the video on Youtube of the song he and Edgar often played at Christmas….This song alone and Johnny’s singing, to me, puts him in a category all by himself. He could do it all!! I despise the rock world and most the greats you admire for not stepping up to acknowledge and pay great respect to Johnny as it is due. Says allot about the charater of these people after Johnny died, staying silent. Thankful for the ones (Joe Perry, Billy Gibbons and others) who loved and appreciated Johnnys life work. Long live the Professor, as I liked to call him…..Miss you Johnny! (But still keeping me company many a nights through all your music)

Hi Doug, just read your blog post, and could not agree with you more about SRV. When SRV started getting big, I told everyone that started raving about him that they REALLY needed to listen to Johnny. To me, Johnny was the rockingest blues guitarist I have ever heard, and that voice – so real! I loved the “…Live and” record, with Rick Derringer – that record just smokes! I also love the Edgar Winter and the White Trash live double album where Johnny guest stars doing Rock and Roll Hootchie Koo. Rick Derringer cranks on that record too.

I was able to see Johnny in ’81 while I was in college, and he just breathed fire. He had a great rhythm section with him, two young guys. The warm up act was Head East (a strange touring combination). Head East was meh, then Johnny came out and just vaporized any memory of their set.

Johnny lived hard, but he left some great music behind. RIP!

Just saw you in Melbourne. You were the subject of a lot of “Who the hell IS that?!”

I saw Johnny years ago in Cocoa Beach and was so sorry to hear of his loss. Your post is great. He was a force in the Blues world, and we are left impoverished, musically, by his loss.

Now, about that mile-high bend with the guitar behind your head…!

Just saw you with Edgar doing the Johnny Winter tribute in Engelwood. As an older guy Johnny was my window into the blues. It was listening to Johnny as a kid that led me the source Muddy, Howlin’ Wolf etc. To this day when I play (and I play nothing like Johnny) I hear Johnny’s vibrato, Johnny’s vibe. He was always my favourite. That’s why I went to Engelwood Although I saw him many times, in Engelwood I was going was to meetJohnny for the first time. May he rest in peace. He will always be alive in my memory, and countless others too. I’m glad a younger dude like you can spread the word to a new generation.
PS I now want a “DR” monogrammed guitar strap.

Awsome tribute!! It started a little harsh but after a minute I realized it was coming around to an awsome tribute…I doubt you remember me, I had to find you to apologise for the indirect disrespect at the Detroit airport asking for a photo with Mr. Winter..I did not realise you werent just an entourage but the band or I would have asked for a pic with the whole band. Not that that would have helped my cause, but wouldnt have seemed so disrespectful towards you. That was my bad
Best to ya…..Johnny

He was the best I ever saw. He could do it all and SRV knew that. I saw them both in NYC down by the piers Johnny was opening act and SRV was head lining. Johnny was of course at his best. SRV came out and said “ not sure I can top that but here goes” respect was given at the highest level. Most if not all guitar players understood that JDW was the channel for future generations. He also took care of Muddy when it was needed….the fire in his voice as well as his playing was one of a kind!